The evening was amazing, a guy called Stuart who has been part of the N/a’an ku se team for some time came & chatted with around the fire as the sun went down. Stuart was on ‘holiday’ from Mangetti .

‘The Mangetti Complex comprises two main areas; the Kavango Cattle Ranch, a government farm conglomerate in the Kavango region of northern Namibia, and the nearby Mangetti National Park. In total the study area comprises more than 2,000 km2of north-eastern Kalahari woodlands and mixed acacias avannah. The vegetation is thick and dense allowing even the largest species of wildlife to simply vanish before your very eyes.

Namibia Nature Foundation, N/a’an ku sê and The AfriCat Foundation have been granted access to the property for African wild dog research purposes.

Stuart is from Scotland & what an AMAZING, knowledgeable man !! He spoke to us at length about tracking elephant & how even he, as an accomplished tracker with all the equipment can struggle to find these enormous creatures at times as they can just disappear into the vegetation.

He spoke to us about the use of drones, there is a problem with drones at N/a’an ku se ~ it is one of the things we need to watch for on night watch !! He is a bit of an expert in the drone field & is hoping to create something that will just disable drones trying to enter the farms land, as well as being able to track elephant by drone.

He also spoke to us about which were the most endangered species & near the top of the  IUCN Red Data List http://www.iucnredlist.org/  are the African Wild Dog, Na’an ku se have Wild Dogs & are in talks about hopefully using them to increase the wild population !! He also talked about ‘trophy hunting’ & explained how done ‘properly’ it is actually not a bad thing, now I am still not sure how I feel about it, because it clearly gets abused, but the example he gave us was this ~ permission was granted for five rhino a year to be used for ‘trophy hunting’ those responsible for the rhino can choose UP TO five a year, these will be sick, very old or troublesome rhino, in one year only one rhino was chosen for ‘trophy hunting’, this rhino was a troublesome rhino & would be disposed of one way or another, if it is allowed to be ‘trophy hunted’ this brings money that will be used for the protection of other wildlife, there were no more rhino which fell into the permitted category, so no more were ‘trophy hunted’ in that year, I guess it makes sense, afterall this is a very poor country & the money goes back into the conservation, but I still dont know how I feel, it’s hard to accept that there are people who get cheap thrills from killing these animals, I guess that’s what I struggle with, It’s sad that money needs to be generated from these weirdo’s, I would prefer those who make the decisions kill the creature it that’s what needs to happen ~ sadly there is no money int that !!

ANYWAY ~ a small group of us had a very enjoyable evening with Stuart ~ expanded & fed our minds & I hope other volunteers get to enjoy the same experience when opportunities arise !! 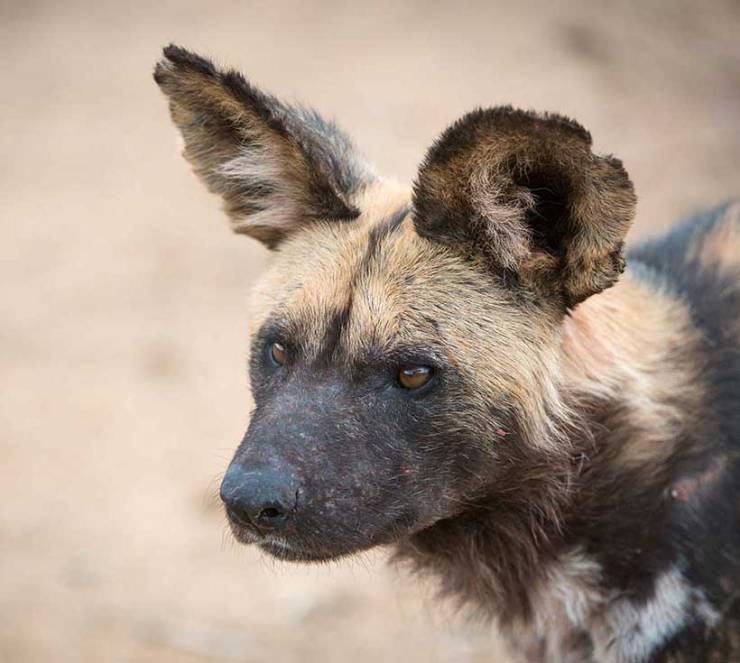 The African wild dog (Lycaon pictus), classified as endangered by the IUCN Red Data List, is without a doubt the most endangered large mammal in Namibia with an estimated population of less than 500 individuals left in the wild.

When N/a’an ku sê was approached to rescue and rehabilitate a litter of 14 pups which had been dug out of their den, we realised that this species was in dire need of help and also that their plight fell precisely into our already running human-carnivore conflict mitigation project. We therefore, with the cooperation of the Namibian government and the landowners on whose properties the dogs are active, initiated the African wild dog project.

This project’s main aims are to establish more reliable figures on the free-ranging African wild dog population in Namibia; in particular it’s basic ecological parameters over an extended period of time, including distribution and range use, group composition, movements where possible, breeding and prey ecology.

The main study area is the Mangetti Cattle Ranch, a government para-statal farm conglomerate in the Kavango Region of northern Namibia. The ranch is approximately 168,900 ha in size and is comprised of over 40 individual farms primarily for livestock production.

Recent aerial game counts have confirmed an alarmingly low natural game population in the area, which increases the chances of wild dogs hunting livestock for survival. Other aims therefore include the documentation of perceived versus actual degree of human-wild dog conflict and the development (and implementation) of educational and mitigation (i.e. conflict prevention) programmes.

Currently the project is monitoring wild dog numbers & activity with the deployment of motion-sensitive trail cameras and interviews of local residents & land-owners. We hope in the near future to fit suitable GPS tracking collars to members of the known free-roaming wild dog packs in order to gather more detailed information on their movements and ranges.

The Namibia African Wild Dog Project (NAWDP) is jointly conducted and facilitated by the N/a’ an ku sê Research Programme, Namibia Nature Foundation and the Africat Foundation, and supported by the Namibia Development Corporation and the Go Green Fund.