Our chore this morning was ‘The Hunger Games’ (carnivore & baboon feeding) with Shauna, Shauna & I are both English, Shauna & I were both born in Swindon, England lol ~ what are the chances, hundreds of miles away from home & you meet someone born in the same hospital as you ~ all be it quite a few years difference !!

The baboons on this chore are the longest of the baboon residents, or ones who have come in older & not needed so much human interaction. N/a’an ku se do not breed the animals in their care, however, a ‘wild’ baboon has decided to live in captivity with the N/a’an ku se baboons, this male has not had a vasectomy life the other males, so has bred with the captive females & there are a few babies, these babies are quite different to the ones we walk, their behavior is quite bratty in comparison & Shauna explained that they are born into the hierarchy, so the babies of the head female were considerably brattier than the others & ‘daddy’ is enormous as he was all his bits intact, more muscular by far than the other males & his FANGS wow  !!

We also fed the African Wild Dogs, lions, cheetahs & leopards. The farm had been given a donation of chicken which some of the volunteers had mainly plucked apart from tails & wings, so I ended up removing those before we chucked them over. The feed took all morning as we chatted with Shauna alot & learned alot from her, it was a really good, informative & enjoyable morning.

After lunch we had the afternoon off as our chore was ‘Lion Guards’ ~ we would spend the night on the watch tower next to the lion enclosure, watching out for poachers & drones !!

The idea of having the afternoon off is to get some sleep, however I had booked the ‘San Bush People’ experience, this was really enjoyable, a family of San Bush spend time at the farm, teaching their way off life, tracking & plant knowledge in traditional dress, in order to make money, as they are incredibly poor. One of the guys was teaching us about the bush, but all one of the ladies wanted us to know is that, as well as it’s medicinal properties & its use for making weapons, its branches are also used for cutting the umbilical cord !! Babies are born in the desert as it it believed if they are born in the home, due to the amount of water lost ~ which is a precious commodity in the desert ~ it will bring bad luck & the hunters ~ even if they spear an animal will never kill it ~ they will never successfully hunt again, so to avoid this bad luck, the babies are born in the desert & their chords cut by this bush !!

The ladies sang & danced for us, the ‘dance’ involved them being in a circle chucking a rock to each other, how can people have so much fun playing with a rock ?? Then the men did two dances for us while they all sang, one was the giraffe dance ~ the other the rhino dance, it was quite fascinating & a very worth while way to spend a couple of hours (even if I should have been asleep) They make jewelry from ostrich shells for tourists to buy, I bought a little goatskin bag.

In the evening we embark on out night watch, equipped with sleeping bags, mattresses, hot chocolate, which I can’t abide, a torch & an infra red torch (which gave up after 10 seconds.

We were a bit hysterical, apparently the lions usually sleep by the platform,  I guess we laughed too much cus they moved away a bit !! I had been longing to see giraffe from day one, just about everyone else had delighted in telling me they had seen them in all different locations & circumstances, so we had come to the conclusion I was a curse ~ UNTIL tonight, admittedly they were a little way off, but close enough to identify four adults & two babies grazing with a herd of zebra. I managed to coax the girls off of the platform to venture a little closer to take photo’s ~ too be fare it didn’t really make a difference ~ but I saw them ~ at last!!

There was thunder & panoramic lightening until the early hours, so there were periodically clouds & we were in the pitch black, when the clouds broke from time to time they sky was FULL of stars, sadly I couldn’t get a picture which did it justice, but it was amazing & we saw three shooting stars.

As the sun went down, we were sure we saw a drone, called it in, but after checks with Windhoek airport, turns out it was just a plane landing.

Around 3am whilst the girls were sleeping I caught a pair of eyes in the torch light, I watched for about an hour as this lone pair of eyes moved around the desert, but that was as exciting as the nightime got. It is soooooooo hard to stay awake, then thankfully it’s 6am & Burton turns up to take us back to the farm, our tents, our beds & sleeeeeeeeeepppppp !! 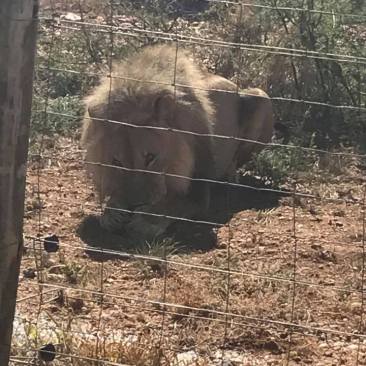 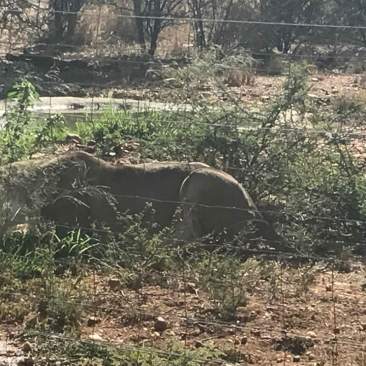