Chimpanzee meat is being served as a delicacy at British weddings and sold as ‘bush meat’ on market stalls, it has emerged.

The border force is under pressure to introduce DNA testing to identify the meat at customs and has said it would be investing in new technology to tackle the rising issue.

Leading primate scientist Dr Ben Garrod has said he was told by customs officials just weeks ago that a ton of bush meat from West Africa had been confiscated on a flight bound for the US.

He said it was routinely smuggled into Europe and the UK – which could cause the spread of serious disease as the meat is unsanitary and chimpanzees are very genetically similar to humans.

but I could find nothing else, so all I can say IS, if chimpanzee meat IS available in the UK and IF you are knowingly eating chimpanzee meat, then I am happy in the knowledge that you may be cursed with a serious disease, the worlds wildlife is being wiped out, species by species, there is no need to eat exotic meats of ANY species, if you must eat meat there is PLENTY of pigs, cows, sheep & chicken !!

These are just a few of the FORTY TWO chimpanzees orphans now residing at Liberia Chimpanzee Rescue & Protection because people like to eat their families !!

If you are in the UK & would like to fundraise to help build these orphans a sanctuary, please contact me at 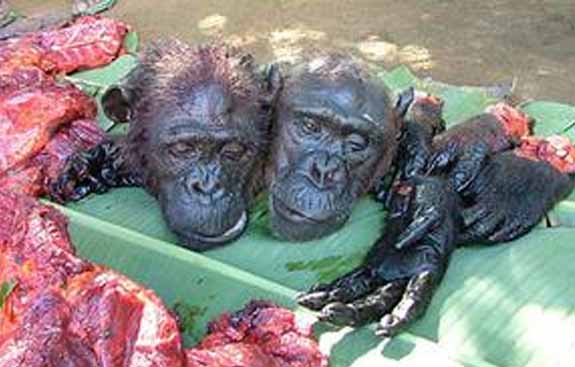